The dreaming: Indigenous Australians are making an embassy in the One of the world’s oldest living cultures is meeting the world’s newest emerging tech as Indigenous Australians begin to take part in the Metaverse.

“First movers need to be there. Indigenous Australians have a culture about dreaming. So, we need to do it.” Professor Vanessa Lee-Ah Mat, a cultural broker focused on wellbeing through Australian Indigenous traditional culture, told Cointelegraph. Lee-Ah Mat and co-founder, cultural brokers, artist and lawyer Bibi Barba and lawyers Joni Pirovich and Angelina Gomez, publicly released a discussion paper this week entitled “First Nations Culture in the Metaverse.”

The group is seeking support to set up a pilot project to achieve the aims in the discussion paper and create a First Nations Cultural Embassy in the Metaverse.

Lee-Ah Mat of the Yupungathi and Meriam Nations and Bibi Barba of the Darumbal, Biri Gubi, Gadigal and Yuin Nations are in the process of setting up an independent entity with First Nations ownership and governance to negotiate with relevant stakeholders and establish and run the operations of this pilot project.

In November 2021, Barbados launched its embassy in the Metaverse. In February, another Indigenous Australian group, the Sovereign Yidindji Government in Queensland — a first for the country — launched its own digital currency as a way to further foster self-sovereignty that it has claimed since 2014 and plan its own policy planning priorities.

“This Australian Indigenous Cultural Embassy is seen as an MVP,” said Lee-Ah mat. But, how do indigenous cultures view the Metaverse?

Indigenous culture and the Metaverse

At first, the connection seems tenuous: An ancient traditional culture deeply connected to the natural world and to the land and dreaming connected with a new virtual world built on computers with pixelated imagery, avatars and imagined places. But, the link is clear and logical.

Indigenous culture is built on the dreaming, as Lee-Ah Mat explained:

“The dreaming is an inadequate English translation. The dreaming is a non-static and non-linear past, present and future and integrated in the ground of the earth itself. Part of the kinship system and lore, pivotal to identity.” 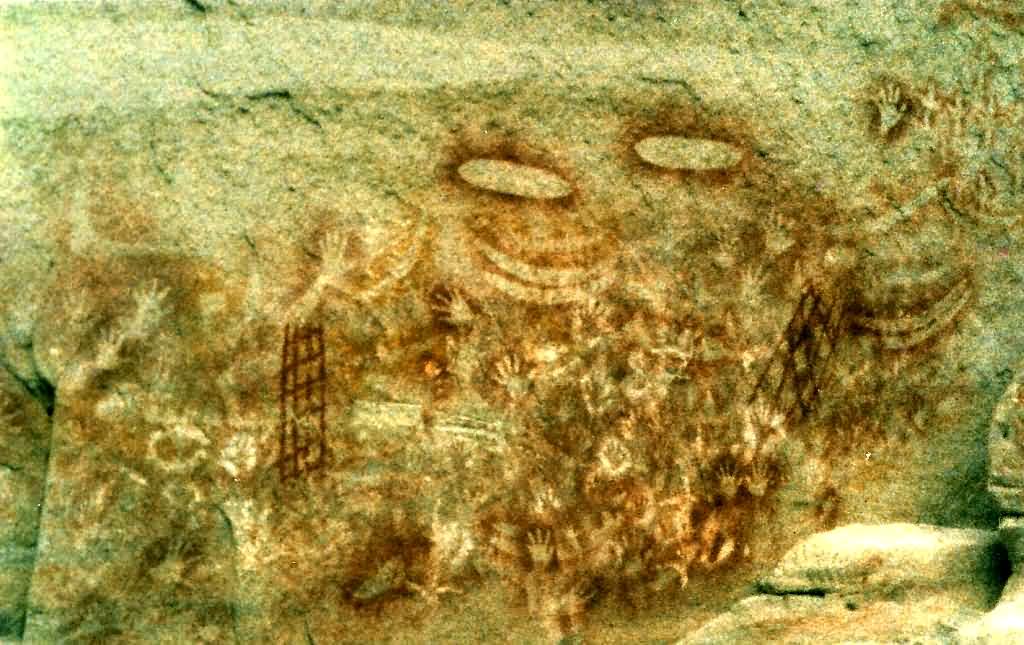 Rock art from Carnarvon Gorge that may portray “memorials, signs from or appeals to totemic ancestors or records of Dreaming stories.”

She argued further that the Metaverse is a future deeply connected to the present, stating that “the process of creation gives identity and connection to people. During creation, the ancestors created sacred worlds between the land and the living. From birth, we are taught to connect with the physical and spiritual worlds, past the present, future — The Metaverse is a future realm.”

So, the Metaverse, according to Lee-Ah Mat, is a “new paradigm of digital living, which currently lacks social structures but impacts the real world.” Indigenous lore explains that past, present and emerging futures are connected. Lee-Ah Mat believes that the Metaverse is an emerging spirituality and meeting people must have a presence there as a symbol of welcome and recognition.

Why an embassy? Native land title in the real world

So, for Lee-Ah Mat, it is important to “understand custodianship and past and current approaches to native title. Regarding land claims in the physical world, there are 240 years of catch-up. Part of the motivation is cultural healing. It’s also about identity and lost sovereignty for our culture. There is no playbook for empowering indigenous communities. New technologies can help us try to leapfrog a legal process.”

Having a cultural embassy for the group is about “using the future to re-write the past. It’s about leapfrogging the political process and making the cultural process part of that negotiation from the beginning — change from the get-go. Crypto allows us to be part of the conversation again by adopting the newest digital tech,” Lee-Ah Mat said.

A suicide prevention specialist, Lee-Ah Mat is also building an AI-powered application to measure depression, connecting to the Aboriginal community’s health services. She believes “economic empowerment in indigenous communities can reduce suicide.” She is zealous about using tech to help her people.

Virtual signaling in the virtual world

Part of this project is a protest against existing political recognition — or lack thereof — as well as a statement of support in the Metaverse. According to Lee-Ah Mat, it’s about “creating a learning environment as the virtual land grab is on. So, someone can’t buy an Indigenous sacred site or natural wonder Uluru in the Metaverse and not understand our spirituality and dreaming connected to that site.”

The discussion paper writes that “Virtual land that ‘mirrors’ the earth is being sold without acknowledgment or consent from existing land or Native Title owners.” Further:

“Virtual land that is being created as part of imaginary worlds is also being sold with neither recognition of the cultural significance that ownership of land entails for First Nations peoples, nor acknowledgement of the spiritual connection that exists between a person, the virtual land and their participation in it.”

The educational aspect of the cultural embassy is about teaching early adopters. “Gaming treasures and loot could be breaching culture and lore. NFTs could be totems in first nations cultures.” The discussion paper argued:

“Virtual land is being created as a basis for privileged and best access for virtual games, work, leisure and learning environments. The ‘virtual land grab’ is on with companies and venture capital firms buying plots of virtual land ahead of the possible but largely unknown commercial opportunities and without any recognition or strategy to ensure equitable ownership of land. Play-to-earn gaming and immersive metaverse experiences present a new paradigm of digital living, which, more than ever, may have something to learn and benefit from rich Indigenous culture about identity and kinship.”

Among its aims, the discussion paper stated that “Kinship is about having social responsibility to yourself, each other, and about inclusion within the physical and spiritual worlds.” There are many references to an “equitable metaverse.”

For example, images of deceased people should not be viewed in Aboriginal culture as a mark of respect. So, how does this play out with nonfungible tokens (NFTs) and avatars of deceased Indigenous Australians? “We need these conversations in the Metaverse to discuss cultural sensitivities, hence the embassy idea.” 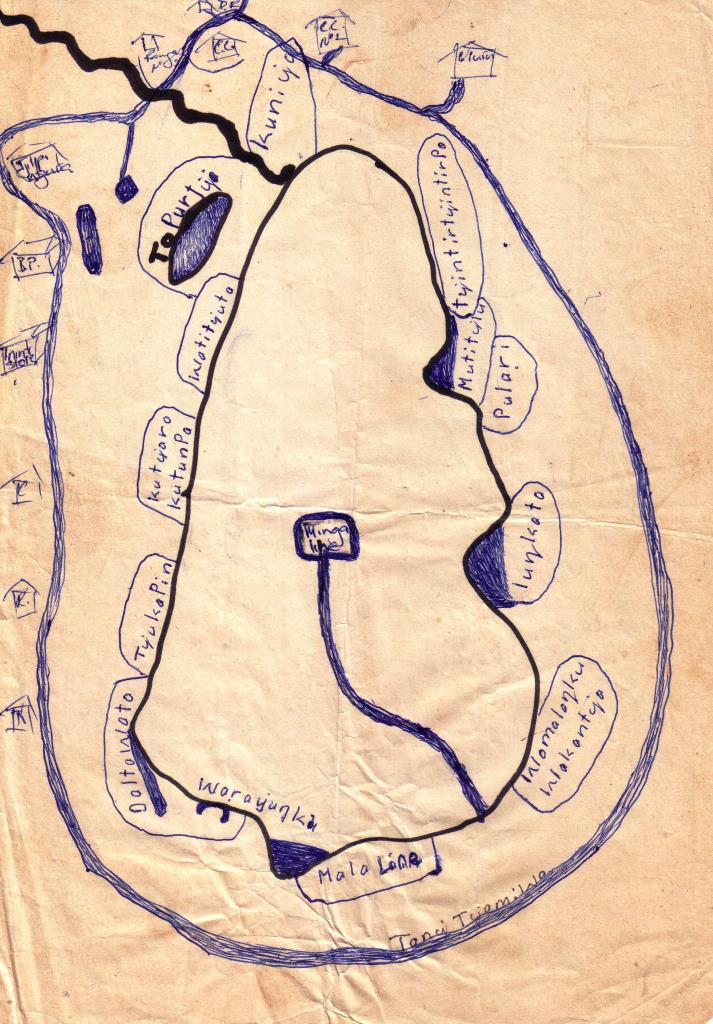 A map of Uluru by Tony Tjamiwa, a healer and elder of the Pitjantjatjara people. Source: John Hill.

There is obviously the danger of racism and sexism in the Metaverse. Nonfungible tokens, for example, have been accused of being colorblind. Therefore, Lee-Ah Mat says Indigenous Australians and other minority groups need to “have a say in the processes and protocols of the Metaverse.”

But, while centralized platforms like Facebook can at least claim to police inappropriate behavior, how this plays out in the Metaverse remains to be seen.

Lee-Ah Mat said that “in the Metaverse, we run the danger of recreating a system not working in the physical world, but with a cultural embassy we can have a presence.”

She stated that they are only looking at decentralized Metaverse platforms due to a perceived kinship with crypto people and ideologies because “we don’t want to be playing catch up as governments begin to regulate the Metaverse.”

“Decentralization already existed in indigenous cultures, as cultural lore is already decentralized and distributed to all of the people. The kinship structure is decentralized,” she said.

The project is currently in the design phase with a hexagonal dome cultural embassy providing “multiple doors for many conversations.” They have received offers to donate some plots of land and hope to have virtual embassies on Metaverse platforms like Decentraland and the Sandbox.

They are also looking at a special purpose decentralized autonomous organization designed to run the group and operate the planned Cultural Embassy missions.

“Blockchain is about transparency and trust, as well as creating imaginary worlds. With no recognition of cultural significance, land or indigenous culture, there is a risk of repeating the mistakes of the past,” noted Lee-Ah Mat.

“Indigenous lore on invitations is to treat someone else’s land as if it were your own land. Imagine if we could make that part of the Metaverse.”